Montreal, November 11, 2013 – On November 7th, over 50 staffing industry owners and managers attended a one day educational forum in Montreal. At the time of this event, well respected economists and researchers presented research findings highlighting the importance of the staffing services industry.

Contrary to the myth of staffing agencies in Canada taking advantage of workers’ lack of job security to rake in the profits, the Montreal Economic Institute (MEI) has shown that this industry plays a vital role in facilitating the integration of the unemployed in general, and immigrants in particular, into the labour market.

“The staffing services industry acts as a springboard to employment. It allows the unemployed to get a leg up, and it allows employers to get a sense of their abilities, thereby facilitating good matches between the two,” explains Youri Chassin, economist and author of an Economic Note published today entitled “The Advantages of a Flexible Labour Market.” 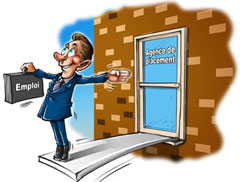 The strong growth of this industry, whose operating revenue in Canada has doubled in ten years, goes hand in hand with the growth of non-standard employment which, since the start of the 2000s, has surpassed in number so-called traditional employment, i.e., permanent and full-time employment.

Contrary to popular opinion, non-standard employment is voluntary in 77% of cases. More and more workers want the flexibility associated with a position that is more tailored to their family obligations, to the pursuit of their studies or to progressive retirement.

Only one in four say it represents an involuntary option, because they cannot find a full-time position. Even for them, however, “the staffing services industry can represent a step in the labour market integration process,” underlines Mr. Chassin. Indeed, researchers have established a positive causal link between the use of staffing services and the likelihood of finding a permanent job.

The publication points out among other things that immigrants benefit the most from the staffing services industry, which allows them to prove themselves to employers who might have difficulty evaluating the diplomas and skills of newcomers.

In a policy brief on solidarity released last week, the Quebec government mentioned its intention to increase the regulation of this industry, in particular so as to provide more protection to domestic workers. But according to the president of the MEI, Michel Kelly-Gagnon, “Nearly all staffing agencies are respectable firms that play a useful role. The government should therefore focus on cracking down on those companies that are operating illegally and defrauding vulnerable immigrant workers.”

ACSESS is the single voice for promoting best practices and ethical standards for the recruitment, employment and staffing services industry in Canada.

ACSESS is the single voice for promoting best practices and ethical standards for the recruitment, employment and staffing services industry inCanada. Each month, ACSESS publishes the results of the Canadian Staffing Index, and independent survey conducted by Staffing Industry Analysts. The Association also offers a broad range of services to members firms located in all regions of Canada.